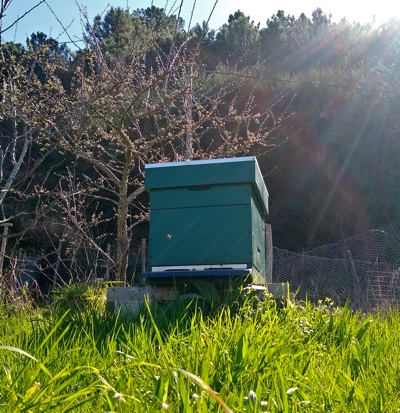 While there was fantastic skating weather in the Netherlands last weekend, we had our first spring weather. With 15˚C, it was wonderful to play outside in the garden and the bees thought the same. That cheerful buzzing on those first days of spring is one of the best things about beekeeping. And to be honest, this year I was very relieved to see our bees buzzing outside.

In October I was already worried whether our bee colony would survive this winter. Until that month the colony seemed really fine. It had grown considerably in the summer and the varroa control with the thymovar also went well. But at the end of September, it was suddenly very busy at the hive. Too busy, in my opinion. Many bees hung in front of the entrance, and they seemed stressed. I had just fed them, to stock their winter supplies. And then I realised: They were robbed!
In the Netherlands, we got to know this behaviour in our bee colonies. We saw stronger colonies invading weaker colonies to loot the food stocks. Weaker colonies are often smaller and therefore have fewer bees to properly guard the entrance. The difference is that we have only 1 colony in our garden now, so these must be robbers from the neighbours!

Robbery/looting has to be stopped as quickly as possible because it comes together with fighting, which stresses the bees a lot. You see the bees rolling out of the hive in a scrum. Eventually, the weak hive gives up the fight and all the food will be stolen from the hive in no time. And that would mean the end of the hive. I didn’t want that to happen.

Robbery is very difficult to stop, but I did try: First, I reduced the entrance of the hive. I blocked the opening with two half clothespins, in such a way that only 1 bee could go in or out at the same time. In this way, the colony could better guard the hive against robbers. During three rainy days, I closed the hive completely and fed them a little. By this, you force the robbers to look for another source of food. And hopefully they ‘forget’ the route to the weaker colony. It seemed to work; in the following days the activity in front of the entrance calmed down.

Unfortunately, in that month our bees were not only attacked by other honeybees, but also by the Asian hornets. All in all, as a beekeeper, I got a bit discouraged. I said to Nuno, I’m going to let it go. I can’t stop all the robbers and Asian hornets. If our colony doesn’t make it, then so be it. If needed I will conclude that the conditions for keeping bees are not good enough here…

During winter we did not see the bees. The months of December and January were bad this year. It was colder than usual, with even a little snow and lots of night frost. Those poor little bees, I kept thinking, with so little food and with so few bees, winter is taking a long time for them this year. On the first day in January with a temperature above 8˚ C, I hoped to see the first bee. But nothing… I took another good look at the hive and put my ear on the box to hear a sign of life. I did hear something, but the opening seemed blocked. I opened it up a bit and saw only dead bees. With a pancake knife, I removed two handfuls of dead bees from the bottom!
Probably the winter cluster, which the hive forms to keep itself warm, was not close enough to the food. Maybe that is why a lot of winter bees* died at once. Too many for the remaining bees to remove from the hive. So the entrance was clogged up. Luckily I got there in time. Just a little after that I saw some bees flying.

And so, this weekend there was cheerful buzzing in the garden. I couldn’t resist taking a look in the hive. And to my surprise, it looked better than I expected. There were still quite a lot of bees in the hive, there was still food and the queen already laid some eggs. The first summer bees* will emerge from their cells in a few weeks. That gave me a little confidence as a beekeeper. So far, beekeeping has not been easy here in Portugal. No doubt, that is because I only had 5 years of beekeeping experience in the Netherlands, but also because the circumstances in Portugal are slightly different. We are still discovering and learning how the seasons evolve here. Nuno notices the same in the garden. The soil here is different, the weather conditions are different and the vegetation here behaves differently than we expect and estimate. Which quickly makes us constantly running behind the facts. The bees can teach me a lot again this year. And hopefully, I will be able to support them in the right way, to make them stronger and to allow them to give us some honey this year. Even if it is only 1 small jar…

*winter bees are bees that live through the winter. In contrast to the summer bees, they live much longer (± 5 months). That is because during winter they have fewer tasks, there is no need for building honeycombs, taking care of bee larvae and fetching pollen and nectar. When the outside temperature drops below 8˚ C, the winter bees in the hive cluster together in a clod. We call this a winter cluster. In the center of the cluster, it stays warm enough for the bees to survive and if there are larvae to keep them warm.

Two useful links for beekeeping in Portugal:
a manual from the Ministry of Agriculture: manual_apicultor
and a guide from the Portuguese Beekeepers Association: manual-de-apicultura

Portuguese words for a beekeeper