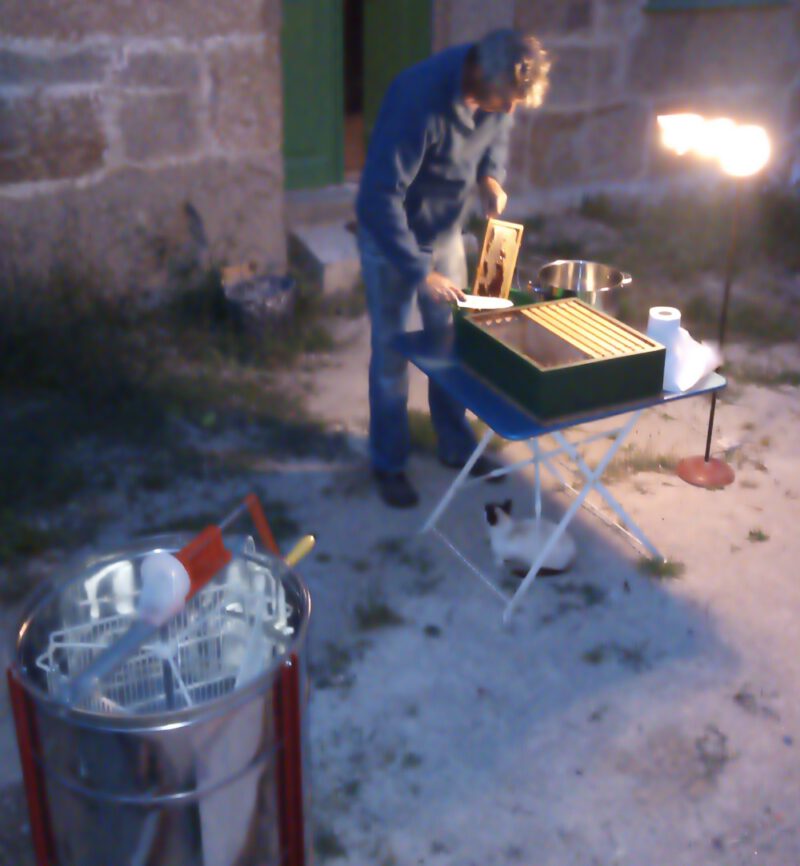 The photo is a bit blurry. Still, I’d like to share it, because it’s such a funny scene. The sun has just set and Nuno is ready to start processing the honey harvest. On the table is part of the wooden hive. There are 7 honey frames in it with ripe, capped honey. In the left corner, you see the honey extractor, ready to spin the honey out of the frames. The neighbour’s cat is hoping there’s something for her and is waiting curiously under the table…

It is tempting to write a fantasy story about the importance of harvesting honey by moonlight. But, of course, that is not true. The truth is quite crude and not at all pleasant:

A few weeks ago, Nuno wanted to mow a field with the brushcutter. He had not even started when one of the honeybees flew straight for his nose and stung it. Ouch!
Nuno dropped everything, sprinted to the medicine cabinet, tried to pop the stinger out, put the poison sucker on it and immediately swallowed antihistamine. Just to be sure, he dabbed the sting with vinegar and then took a shower. In the meantime, I had come to see what was going on and was shocked.

After showering, Nuno’s body was covered with red bumps and his face was swelling like a balloon. I was standing with my phone in my hand ready to call 112. According to the patient, this was not yet necessary. Every 5 to 10 minutes we checked whether the allergic chain reaction would continue. After an hour, it seemed to stabilise; the red bumps disappeared, but his nose, cheeks and eyes swelled further and further….

This was not Nuno’s first bee sting, so we knew more or less what to expect. We also know from experience what it’s like to be stung in the face. You are going to look like a monster. His face was so swollen! Fortunately, that waned after 48 hours, but the fear of another bee sting is well and truly present.

When we first started beekeeping, I had never been stung by a bee or wasp in my life. I had no idea what that meant or how much it hurt. It seems that with every sting people react either stronger or less strongly to the bee venom. Nuno and I are both unlucky enough that our reactions are getting stronger. After last month’s sting, we are therefore reconsidering.

We’re even more careful not to get stung. For example, by being careful with chemical air in the vicinity of the beehives. They probably stung Nuno because they interpreted the brushcutter’s gasoline smell as a threat.

We also doubt whether we still want to keep the bees in the garden. In these months you cannot move the hives a few hundred meters. But in the winter months, we will see if we can move them to a deserted terrain nearby.

All in all, the bees had something to make up for. And luckily they did. When we walked past the hives, we could already smell the honey. And so, to make room for the last nectar that the bees can still collect this summer, I took 7 frames with capped honey from the wooden hive.
That makes almost 7 kg of honey!

Getting honey from the hives

If you take honey frames from the bee colonies during the day, you are very likely to get a few stings. That’s because you want to shake or wipe off the bees that are on the comb. That causes a lot of unrest and can turn the bees a bit aggressive. That is why I use a special separator, which allows the bees to leave the honey chamber, but not back in. After 24 hours, all the bees are out.

So, that moonlight honey harvesting doesn’t yield particularly tasty or medicinal honey but it was safer for Nuno. If you were to extract honey in the open air, during the day, you would have hundreds of bees around you within fifteen minutes. Now it was very relaxed. We didn’t have to worry too much about it becoming a mess and there were zero bugs. The neighbour’s cat didn’t bother us either. She soon realised that there was nothing special for her. After we cut the caps from the comb, we swung the honey from the frames. The Portuguese honey is very viscous, so that took some effort. Work out!

Our Portuguese honey has a wonderfully aromatic flavour. You can taste that it contains a lot of nectar from the gorse and the broom. Great work by our bees!