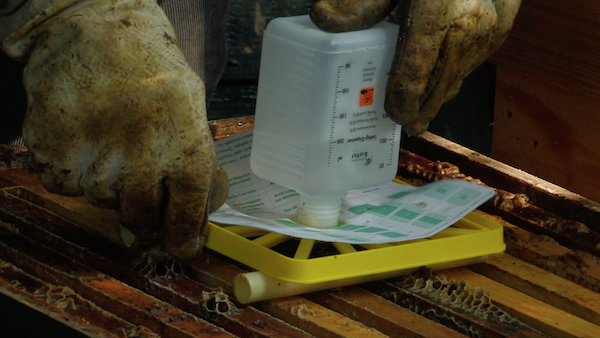 No, don’t worry, our bees aren’t poisoned. But around this time of year, beekeepers fight the varroa mite. This teeny-weeny little spider can only reproduce in a honey bee’s breeding cell. It locks itself in the sealed cell of a bee larva and then it lays 4-7 eggs there. The mite and its children live off ‘the blood’ of the larva. And when it’s fully grown into a bee, they crawl out of the cell with the bee.
As a beekeeper you don’t want the varroa population in your colonies to become too large, because that weakens the bees enormously. Unfortunately, exterminating them completely is out of the question: the varroa mite is too widespread.

Controlling varroa is just like many things: In every country, they do it just a little differently. In recent years some new products or methods have been added. In addition, bee scientists are afraid that the varroa mite will eventually become resistant to certain products, so I found it worthwhile to take a fresh look at controlling varroa.

They sell all kinds of beekeeping equipment in a ‘small-farmer-product-shop’ near here. And I asked if they had anything against varroa. Yes, they did and showed a kind of brown sticky thick bar, which was tightly packed in agricultural plastic and reminded me the most of a big bonk of hash. The salesgirl used a knife to remove two loose slices. Two slices per colony, during 15 days, after that repeat with new slices.
“What’s it called?” “Ticktac” she wrote on a note. Okay, the instructions looked a bit like those of a product I knew from Holland: Thymovar.
At home, I looked on the internet for some more information. Mhm, it’s actually called tactic and the active ingredient is amitraz. The stuff is banned in the Netherlands because it “cannot be classified with certainty as non-carcinogenic”. (I’m not making this up, it’s from the bee department of the University of Wageningen).

Looking for an alternative

I wasn’t gonna use that shit. But what then?
± 10 years ago in the Netherlands we used formic acid, which is known as the most effective product against varroa. When you apply it, you have to protect yourself with goggles and extra protective gloves, because it can cause burns. Back then, it just felt like, “What the hell are we doing?” to me. I wasn’t a fan of it.

And we used thymovar, a kind of shammies soaked in an essential oil; thymol. Super easy to use, just a bit pricey. And, when I started looking, almost impossible to buy in Portugal.
But thymovar has more disadvantages: you have to put it in the hive twice for 3 consecutive weeks, when the temperature does not exceed 30˚, otherwise the bees will suffer from it. The best time of the year is in the second part of summer. But then it is nowhere near below 30˚ here.
Then just formic acid? Or, which I have no experience with, oxalic acid? I couldn’t decide yet. To be on the safe side, I bought Thymovar from a Spanish online shop. And I would decide later.

This week I took another look in the colony.
Huh? Hardly any brood cells anymore?! For a moment I was afraid the queen was dead and therefore I could not find eggs and larvae. Fortunately, I saw a very small piece of brood in one of the frames.
Last time I wrote that if there is little to eat in the area, the bee population adapts and ensures that there are fewer mouths to feed, by killing the drones. Now it turned out, the queen had also slowed down her egg-laying! You can call it birth control, I guess.

If there are few closed brood cells, the Varroa mites are mainly on the bees. Then it is extra beneficial to start a varroa treatment because the varroa mites are not hiding in the brood cells. And I didn’t want to harvest honey first, because there is only just enough for the bees this year. (With every form of varroa control, some residues end up in the honey. So you have to start every treatment after the honey harvest) The temperature is currently well below 30˚ and it is expected to remain so for the time being. So this year I chose thymovar again.
I have placed white sheets on the bottom board so that I can clearly see how many mites have fallen from the hive. It’s going well, about 20 a day: we’ll get rid of those parasites!

And the Asian hornet?

Well, the Asian hornet is not that easy to combat. Those predators now regularly come to our bee colony to catch a bee from the air. They ignore the traps because the hornets are now more hungry for a fresh bee than a sip of a cocktail. Nuno did make a nice hornet whack. So that every now and then, like a drop in the ocean, we can whack one of these bitches to death.
Furthermore, we are not aggressive, really we are not…

By law all beekeepers in the Tras-os-Montes region are obliged to treat their colonies against varroa. In Portugal, the following methods of controlling varroa are allowed: MUV AUTORIZADOS PARA ABELHAS

And while I was looking for this, I came across something interesting. A guide for organic beekeeping from the Portuguese Federation of Beekeepers. Handy if you want to keep bees in a certified organic method. This document states on page 38 what you can use against varroa in organic beekeeping and how.