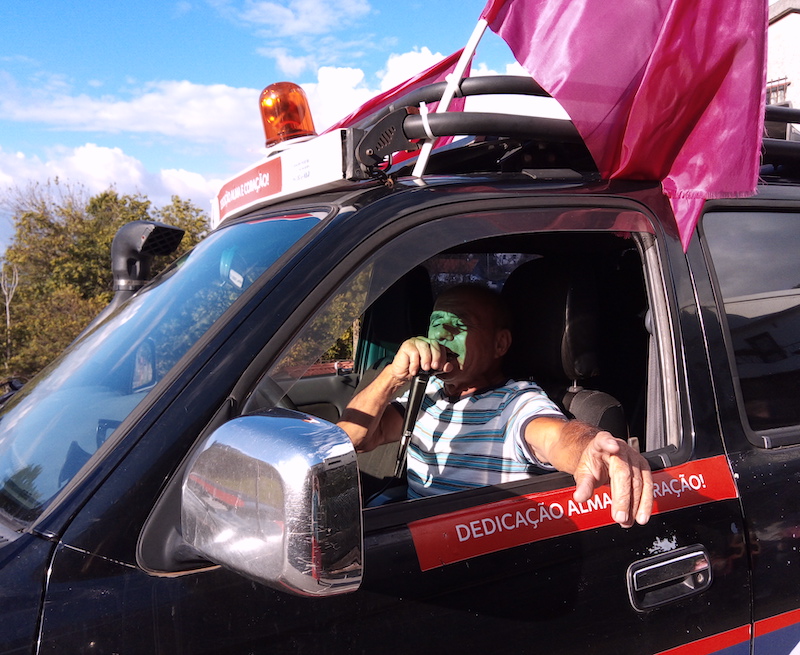 ‘Vote PS, vote Armando Mourisco, vote Paulo Rocha!’ blares from the speakers of the campaign car. I wave the red flag in my hands and have to grin. Who would have thought this? That I would be campaigning for the Socialist Party of Portugal!

It started sometime in August when a man from our municipality and borough came to see us. José Carlos is a busy boss and always very jovial. After the cheerful ‘how are you?’ he pulled a serious face, ‘I want to ask something. Would you perhaps like to become active in the parish? We are looking for new people for our team.’
I replied with a frown. ‘We? Our Portuguese is no good at all!’ No, that’s not a problem according to him. He thinks that we can bring some new ideas as we are active and involved in the community. That last point is true to some extent. I once went to the local council to point out a nice European subsidy for renovating small villages. Not that they did anything with it at the time, but still. Apparently it made an impression. I answer that I want to think about it and discuss it with Nuno. José Carlos agrees, ‘But let me give you the form already, because tomorrow is the deadline to apply. I walk over to Nuno with the form and I’m totally surprised: It’s an application form to list for the next elections on the list of the Partido Socialista! I really hadn’t understood that!

What are these local elections about?

Anyway, to make a long story short: Nuno is in favor and thinks it’s really something for me. And I think, well, I came to Portugal for the adventure and to learn new things, so you have to accept such an offer. Of course, I’m not in an electable position at all: Number 9 or so, while the council of the parish consists of only 6 members. In Portuguese, these elections are called the ‘Autárquicas’ and it’s all about the presidents and councils of the municipalities and boroughs. The party with the most votes automatically produces the president or mayor, who in Portuguese is given the title ‘O Presidente’.

The parishes have been given slightly more responsibilities in recent years. They are responsible for local roads and paths, waterways, transport of the sick and elderly, maintenance of public works and small permits. For this parish council I am now on the electoral list.
The municipal council and the council are also elected, which is one government level higher.

In our parish live about 800 people entitled to vote and there are only two parties active, the socialists (PS) and the social democrats (PSD). Nationally, these are also the two largest parties, center-left and center-right. After the elections, the presidents and councils are installed for the next 4 years. In my parish, the PS has been in power for 12 years and the PSD is accusing them of only filling their own pockets. I can’t get my finger on it yet, what exactly they mean by that.

At the end of August, the campaign started. I was invited to the meeting to discuss strategy. ‘O presidente’ of the municipality, who would like to be elected for a third term, is there to instruct our team in the parish.

It’s hilarious, I have to be somewhere around 9pm and then I get in the car with our number 2 to a village high I the mountains. In the village restaurant, run by a party member, a table is set for our meeting. With too many people in a small room than COVID measures allow, we eat, drink and talk. I understand less than 15% of it that night, as the sound reverberates, people talk interchangeably, and if they aren’t talking from behind a mouth cap, they have their mouths full… I stare my eyes out and marvel at what I do understand. They talk about the other party with little awe, they are vague about why our last number 1 in the parish withdrew, and no one is introduced to each other. At the end of the evening, then, I try on my own initiative to figure out who I was in that room with.

In the weeks that follow, we are occasionally called upon to present our ‘equipa’ in the villages of our parish. Which covers an area of ​​±32 km2 with 20 small villages. And yes, they are all visited. In our ‘equipa’ there is almost someone from every village, and they know exactly where we do not have to knock on the door. ‘No, he does not vote here, but in Porto’, ‘No, he is with the PSD’. And so there are only a small number of houses left in each village that we knock on. Many are friends of the Party, so the conversation is friendly too. But there is also an occasional stiff conversation with residents who have something on their mind. That’s quite interesting. For example about the horrible street lighting, or about the bad condition of a village path, or that the population has shrunk by 15% in the past 10 years. I don’t understand everything, but I do get an impression. And to be honest, I don’t always think my ‘equipa’ has a good answer. Of course I just came around the corner, but I do see a task for me in the future…

But now I have another task: On campaign, I appear to be, what we call in Dutch, the list pusher. Or in other words, the local celebrity who generates some extra attention. Because really, almost everyone knows who I am. Or, at least heard about the Dutch couple who came to live here. And, we bought the house of the famous Joaquim Peixoto. The previous owner was also a local celebrity; a striking man with an outspoken opinion.

Vice versa, I am surprised at how many people I already know in our parish. A woman turns out to be the sister-in-law of the director of the tax office, a man we met once while walking, another man we know because he has bees somewhere. And yes, I like to chat, so I have chatted with many people.

Whether all those people will suddenly vote for the PS as a result is doubtful. In any case, I didn’t think campaigning was a punishment. Whatever the result, I’m going to have a good time in the coming years. All council meetings are public and I intend to attend them. After all, it never hurts to look over their shoulders.