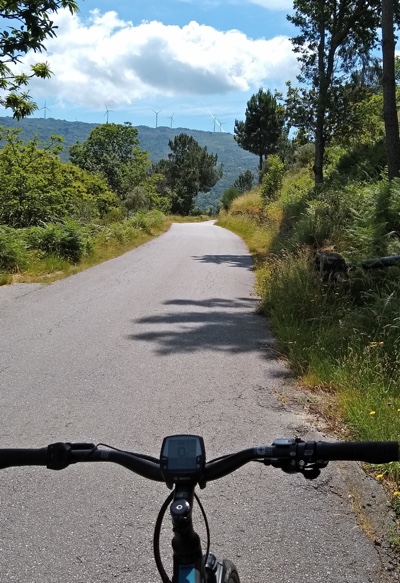 It was about time to test the range of my e-bike in this mountainous area. This week there were two public holidays in Portugal, which meant almost no heavy traffic on the road. Together with a clear blue sky and a cool breeze, the conditions were perfect.

Nuno and I had given ourselves a two-day minibreak from construction, so I took my time to get ready in the morning. Finally, I hopped on my bike around eleven. ‘In the hottest time of day I’m going to climb mountains: Very smart…’ I thought to myself. But actually the timing was far from crazy. Between 12:00 and 4:00 pm, every Portuguese has a long lunch on a holiday. There was hardly anyone on the road. It was a pleasure to have the roads to myself.

On wikiloc I named the tour I did Bestança-Cabrum-Douro, after the three rivers of which I cycled through the valleys. (more info)
The first 14 km was only climbing up to ± 880 meters. It took me almost an hour. Mainly because I passed two old ladies, in one of the first villages, who I had to photograph.

Of course, we had to chat too. The lady with the haystack on her head was not shy and asked me lots of questions: where I came from, where I lived, whether we were working or retired and whether we had children. I liked it a lot! All the more because that is not common around here.

And although it is only 4 km as the crow flies away, according to the other lady, our village down below was very different; so moist! She may be right about that. Granja is almost 250 meters higher than our village and lies in a protected, sunny bowl, even in winter. We continued our paths, so that the hay could go to the sheep.
Granja means ‘farm’ in Portuguese and actually the whole village is one big farm. To me it is a beautiful place. And the people are very nice, I always have a chat there.

After Granja, I whisked down shortly to cross the Bestança and then climb to the Alvagueira, one of the peaks of the Montemuro mountains. I had planned to decide up there whether I would cycle 40 or 60 km. In the lowest gear, sometimes with the highest support level, I climbed to that point quite easily. But the display showed how my battery quickly ran low. Together with the tiredness in my body from construction work, it made me opt for the smaller tour.
But lunch first! I found a nice resting place under a large oak tree, just next to the road, in a field full of flowers.

After lunch it was beautiful and I had the road to myself. The asphalt became a bit worse when crossing the municipal boundary, but it was still manageable. Via a remote road, through an area ravaged by forest fires last year, I entered the valley of the river Cabrum. The cycling went well and easy and I used little support, which made me choose another leap: I drove to the other side of the valley, via the village of Ovadas to Covelinhas, which is lovely.
From there it became a breeze; smooth asphalt and descending, in a way that I could still pedal, without having to use the brakes all the time. On to the next stop: Parque de Merendas do Penedo, or picnic area ‘the Rock’.

This time I didn’t want to stop at the rock. We had already been there with visitors from the Netherlands. In the picture with our friend, you can see how big the rock is. It cannot be climbed, but you can walk around it and enjoy the view.

From here it was only down-hill towards the Douro, on a rough asphalt road I bounced down with my hands on the brakes. It’s a nice stretch, but it’s better to climb it, I guess.
Soon I was on the N222, the old provincial road along the Douro. Fortunately there wasn’t much traffic here as well. Although I missed the remote mountain roads almost immediately. There are several places to have a break, but less private and less relaxed.
I was getting closer to home and fantasized about having a beer in the hammock.

That made the last 11 km all about ‘going home’. I knew the last half-hour had another 400m climb up its sleeve, so I watched the display anxiously. Being untrained for cycling, my body was done with it. After the bouncing, the saddle sore started to get severe. I hoped the e-bike could still give me full support for the final stretch.

After the Bestança bridge, I left the N222 behind and started the last climb. Immediately I pushed on the turbo, the battery range decreased to 11 km. That should be enough! And it was: Arriving home, the battery still had 3km in turbo mode (and 20 km in eco-mode). In total, I cycled 50 km.
Next time I can easily do the 60 km round.

Portugues on the bike: