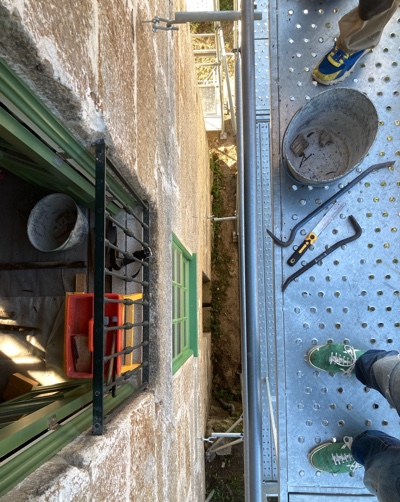 ‘I’m going up the scaffold’ is a much-used phrase these months at As Rolhas. And we often sigh how glad we are that we have bought this scaffold, because we are perfectly safe on it. And we would have had to pay three times the buying price if we had rented it!

We bought the scaffolding from a local building supply shop after doing a lot of research and asking around in the area. It strikes us time and again how protected the retail chain still is in Portugal. The factories work with agents and wholesalers. And the shops have to place their orders via the agents. So, after seeing a product on the manufacturer’s website that we want, we think, okay, let’s ask the local shop to order it. But then, sometimes, that’s not possible, because the agent has said to the shop ‘no, I can’t deliver that’. And the reason? Unclear.

Fortunately, the ordering of the scaffolding was not a problem. The local building shop could supply scaffolding of the brand Fecocivil. A Portuguese manufacturer, which makes three different scaffolding systems: Traditional, R75 European, and Multi.
The first is the simplest and cheapest, but we found it too scary to build 7.5 or 10 metres high. The Multi is what most professionals use, with all the separate parts. You can do anything with it, but we found that a bit complicated as amateurs. So we opted for R75.

The building shop had a software programme from the manufacturer. In it, he entered the total height and length, and the length of the components (2, 2.5, or 3 metres). And, whoop, a list of all the necessary components/ parts came rolling out.

Very helpful, but it was not until we used the scaffolding that we knew exactly what we needed or wanted extra.

And there are many scaffolding parts available! You can’t imagine upfront all the possibilities/solutions, or what is useful/inconvenient. To give an example; we built a 12-metre long scaffold consisting of 4 3-metre components. What we had not thought of was the 2 balconies in the facade. Fortunately, we were able to build the long components just around it. However, the facade is 10 meters wide, so the scaffolding protruded 1 meter beyond the facade on both sides. At a height of 6 meter and more, that was a dangerous gaping hole. To fix extra railings along the wall side, we had to buy some extra connections. A drawback; it took at least 5 weeks before the construction shop received our order.

Also, we could not have imagined beforehand how tough it is to erect a scaffold. On youtube, we found a few instructional videos that helped us get started, like this one: Scaffolding Training Video. Although it shows using the Multi system, it taught us how to properly adjust the base of the scaffold before erecting it.

The hardest part was lifting the 45kg heavy stairwell platforms into place. As I write this, my back is recovering from that, as last week we first took down the scaffold and then rebuilt it at another location. Gradually, we learned the best way to lift those large platforms over our heads and put them in place. For example, by carrying them up indoors and sliding them up the scaffolding via a balcony.

Portuguese words on the scaffold