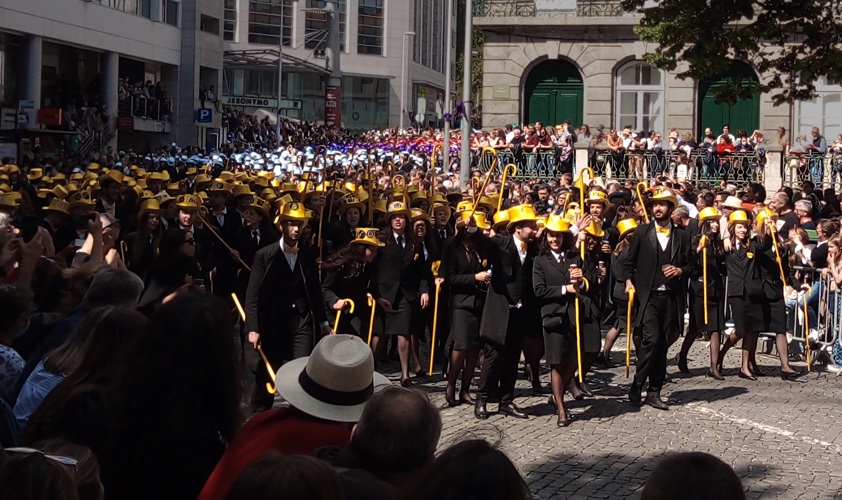 Coincidentally, this month we caught several glimpses of Portuguese student traditions. Our own student life is far beyond us. So I’m surprised to write something about student life in Porto myself.

The first glimpse we got was at the ‘Tunance’ festival in Baião, our neighbouring municipality. At this festival, five ‘Tunas Académicas’ played. A ‘Tuna’ is a band of students who play traditional instruments and sing serenades. The band members wear their traditional academic costume, which is called a ‘traje’. When you see it, you immediately think of Harry Potter. For J. K. Rowling copied the Portuguese traje for her characters.

The phenomenon ‘Tuna’ is specific to the Iberian Peninsula. The tradition originated in the 13th century as a means for students to earn money or food. Tunas play folkish tunes, with guitars, mandolin, tambourine, ukulele, accordion, drums and vocals. This night I recognized quite a few songs from the movie ‘Amélie’. But one of the Tunas even played a tuna-version of Red Hot Chili Peppers’ Can’t stop.

It was a fabulous, cheerful night. The students had a lot of contagious fun. Because every tuna has a few performers to spice up the performance even more: They throw around flags, tambourines, or make acrobatic or comic dances. We loved it!

During the first week of May I was in Porto together with my friend and her daughters. We crossed an enormous crowd of students all dressed in their ‘trajes’ with top hats and walking sticks in all kinds of colors. A few students explained to us that it was a parade to celebrate the graduation of the fourth-year students.

They were too occupied to explain more. But luckily my Portuguese conversation tutor was able to tell me all about it. She graduated from Vila Real for her bachelor’s and got her Master’s in Porto.

What we had seen is known as the ‘Cortejo’. It is the main event of the Academic week in May. During the parade, the first-year students make the transition to the second year and the fourth-year students wave goodbye to the city of Porto. Unofficially they are graduated, so they still have to fulfil their final exams or study obligations.

This is all a ceremonial show, intended only for students who have joined ‘a praxe’, which refers to the initiations to join a student society. Student societies in Portugal are affiliated to the faculty or course. The colors of the top hats therefore indicate the faculty societies. In Porto Red is Law, Yellow is Medicine, Orange is Psychology etc etc.

To join a praxe is not mandatory. And sometimes not possible: The faculty of Architecture decided to stop with the praxe. They weren’t keen on it already, but after some tragedies during the initiation rituals in Portugal, they have completely banned the tradition on their faculty.

The ‘queimas das fitas’, i.e. the burning of the strings/ribbons, symbolizes letting go of the bond, but involves no real fire. A few weeks before the parade, family and friends write a personal message on a ribbon for the fourth-year student. On the day of the parade, the student receives them together with a file map (symbol for the diploma they will get). And at the end of the parade, they put the ribbons in a traditional cooking pot (but their tutor takes them out again to give them to the student).

The nice thing about the parade is to see families and friends lining up along the streets to celebrate this joyful moment with the students and the whole city.

Of course, there is much more to tell about studying in Porto, Portugal and its traditions. Hopefully I understood everything correctly during my conversation class, and the above info is correct.
But hey, I’m still a student too. 😉