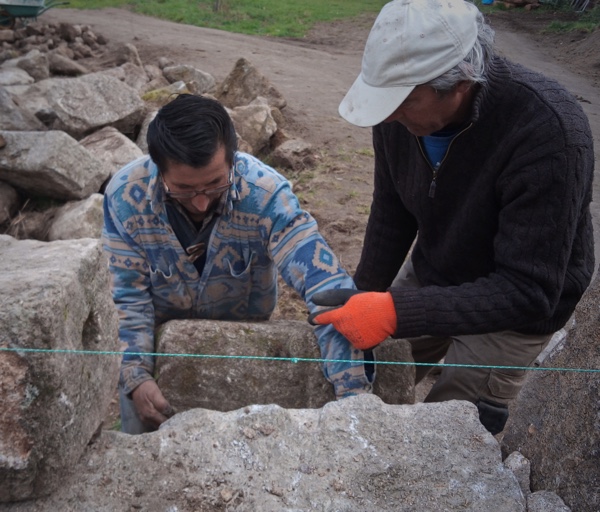 During the last weeks of winter, we hired a local stonemason to build a dry stone wall. This ‘maestro de pedra’ as he is known in our area, is an amazing craftsman. He doesn’t look particularly strong, but in a blink of an eye, he moves the stones of 250kg to every corner he desires.

How long, do you think, did it take him to build this entrance wall?

Before I will give you the answer, I will tell you some details of the process.
Our garden was still a mess after we built the new terrace around the ruin. There were several piles of ground and stones/rocks waiting to be reused in a new entrance wall and to level a driveway for the car. So, first, a guy with an excavator came by. He made the foundation for the new wall. And he lifted the two stone pillars and put them in place together with the stonemason. He also collected some large stones and lay them close to the wall to be.

After that, the maestro was on his own. Nuno and I gave him a little help, by collecting smaller stones to pin in between the large rocks. And every now and then, one of us had to help with tumbling the stones up on the wall. But the biggest help, he got from other things:
• O ferro
The iron bar to pry, lift, steer, and tumble the stones. They come in different sizes. And some of them he made himself of thick steel rebar for concrete (probably cheaper than readymade bars).
• Barrotes
He used two chestnut wooden beams to get the stones up on the wall. He had no winch, no crane, just his bare hands and a strong back.
• Knowledge
He surprised us every time with his choice of stones for a certain place in the wall. We would think ‘That won’t fit ‘, but he made them fit. Besides, he told us in a tone full of mystery, ‘The stones know, where they have to go…’
• Cursing
And if the stones don’t know, or forgot it, the maestro will curse at them to put them in place! It is hilarious, to hear him talk and curse the entire day at the stones. ‘Anda, é isso mesmo, anda, filho da puta!’ Female-friendly Nuno tried to learn him to say ‘Filho do Putin’ instead. But it didn’t work…

It only took him three days to build this entrance wall. The side facing the road is the front, he made it look nice and straight. The inner side has been left rough and there we are going to plant some shrubs.
The wooden gate was a left-over from Holland. We fixed it ourselves. Hopefully, when the ruin is finished we’ll have a chance to pave the driveway as well.
But for now, we’ll keep it this rustic.

Words to communicate with the stonemason