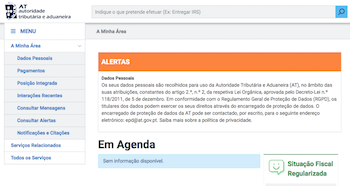 Since we officially live in Portugal, we also pay tax here. The tax authorities are called ‘As Finanças’. As soon as you have a tax identification number, you can request a login for the internet portal and you can do everything related to the tax online. And so this year I also filed my income tax online.

I wrote earlier that Dona Rolha is registered here as a self-employed person. And as a freelancer, you can opt for a simple regime, so you do not have to keep receipts.
The taxable income is a fixed percentage of the annual turnover. The percentage can differ per profession, branch, and the nature of the activities. (See also our earlier blog on the business codes: CIRS and CAE)

The declaration is done with an online form, to which you have to add some appendices to declare your income. The income from the company is declared with ‘Anexo B’.
Every year, you have between the 1st of April and the 30th of June to file your income tax declaration.
It is relatively easy; with a little help from a translator app, you will manage quite well. The system clearly indicates if you have forgotten something or made a mistake. The first time I did it together with an accountant and now I just repeat the trick every year.

How much tax do you pay in Portugal?

In Portugal, there is no tax-free base. So, you pay tax on your income right from the first euro, but there are reductions and scales. In the column outlined in red you can see the average percentage that is being taxed on the income.

But in practice, I pay less tax than that. Strangely enough, it is completely unclear to me how my taxable income is calculated because there is no detailed explanation.

This year I almost forgot the deadline and on June 30th, I filed my turnover, the total of the ‘recibos verdes’, or in English, the bills I had filed (see also sending bills). More than a week later I received a message that my declaration had been selected for further analysis. That made me worry a bit, but it turned out they just wanted an explanation. It had to do with the division between my writing and my film activities. There are different business codes for these, and so they use different percentages to calculate the annual income. You cannot separate them in the declaration form, so an explanation was necessary.
Fortunately, the accountant was able to help me with that. The rest, he assured me, was all good.

And what are you actually paying for?

Soon after filing your tax declaration, you will receive, by post and online, the assessment with the amount you have to pay.
And just after declaring your income, you can consult the simulator to get an indication of the tax you need to pay. This year, again, I have to pay less than expected. So, I am lucky!
And you know what’s funny? After I submitted the tax return, the portal shows you an image to inform you what they will be using your money for:

The tax authorities have a local office in almost every municipality. They process and collect all taxes in their district on behalf of the State. I find it a bit odd that I know who assesses and processes my declaration. But well, privacy is not as high an issue in Portugal as it is in the Netherlands.

After I had sent the additional explanation, I received a message almost within a week that it had been accepted and that the tax declaration was now in order. Another week later I received the adjusted assessment. That is quite ‘rápido’!

Apart from income tax, you also have to pay part of your income into social insurance in Portugal. The declaration and payment goes through another institution, the Segurança Social. We will write a blog about this in the future.

The ‘finanças’ has quite a lot of information for foreigners on the site in English:
info.portaldasfinancas.gov.pt