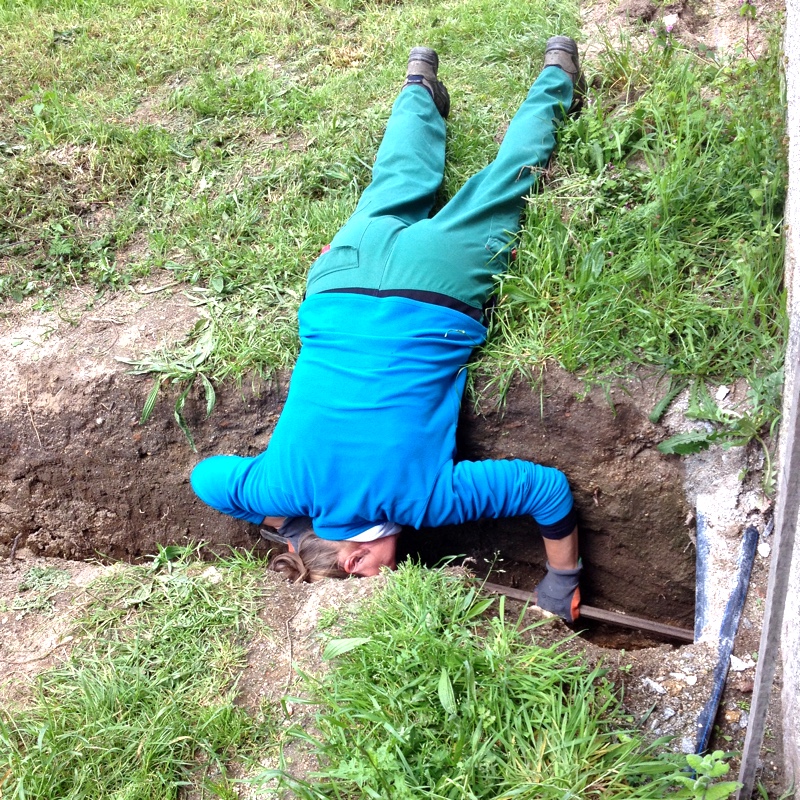 Back pain keeps me in today, yesterday and probably tomorrow too.
It’s a back pain I haven’t felt in a long time. A physiotherapist once called it lumbago. I can barely move, the pain nags all day long. I know exactly what caused it:

Thanks to the COVID-19 measures, I haven’t been to yoga for eight weeks. And because we weren’t allowed to go anywhere and nobody could visit us during the Dutch May holiday, we did a lot of hard work. And especially groundwork. I estimate that we have dug, scooped, poured and moved at least 8 cubic meters of sand, earth, gravel, concrete and cement. All by hand, a shovel and a wheelbarrow. My back is done with it and misses the yoga!

The worst thing about groundwork is that we hadn’t foreseen it and that we won’t see anything of it again. Already during our first winter, we saw how after a lot of rain, the water seeped in through the walls of the ground floor. If we ever wanted to turn this into a livable space, we had to do something about it. We hadn’t foreseen that …
The walls are built in the mountain, underneath the surface. And to make them waterproof, we had a piece of ground excavated last year, in order to reach those walls from the outside and work on it.

Another important measure to get it dry inside is to discharge the water from the house. Originally, the house had no gutters, so the rain went down from the roof straight into the ground, and then into the house. So the trick is to discharge the rain via gutters, drainpipes and drains. And while there’s no pavement yet, we can now easily dig up the earth and open the surface for all the underground work.
And if we are digging anyway, then we’ll also put our future wastewater system in. Like this, we quickly accumulate even more work, because it’s so handy to do it all at once. All with the idea that after this, we no longer have to mess up the garden anymore.

Luckily a man with an excavator helped us with all this groundwork. Four years ago he came to us for the first time to dig a trench for the connection to the electricity grid. A neighbour had arranged this ‘rapaz com maquina’ for us. The boy (rapaz) is now married and has a child. And because our Portuguese is much better now, the communication is also easier and more fun.

André seems to be as one with his machine. Without stepping out, he digs a terrace straight out and ensures that the new bottom is level. And, probably unlike our neighbours, we always ask him to carefully take out old plants, vines and shrubs, so we can give them a new life on a different spot. He does this very meticulously and with that we saved 3 old vines, several roses and one jasmine. That’s why we dared to ask him if he could also move a fig tree …

The fig is a nice little tree, but it stood completely in the wrong spot. Right next to a very old cordyline australis, which may have been there for 80 years, right next to the old wash tanque and right in front of the beautiful view from the house to the valley. Digging it out by hand would be a hell of a job, íf possible at all, because huge granite stones lay underground around the fig. In the winter we had already excavated part of the root ball to stimulate the growth of new roots. And it would have been better if we moved him during his winter rest. Still, we did it now, because next year the scaffolding around the house will stand there, and then there won’t be any space to move it.

After the move, the fig turned out not to be small at all, but quite big. In the meantime, he has already lost his leaves. We try to keep the roots alive with regular watering. Fingers crossed…

After that André dug all the other holes and trenches he had actually come for. In the following 4 days, we connected all the tubing, checked everything 3 times for leaks and then we could close it again. One part by hand, but fortunately André did most of the work with the machine. Finally, we let him pull the concrete tubes out of our driveway so that we could at least do some more work with the shovel and wheelbarrow….

Almost nothing left to see

In the Netherlands you never see a house without gutters and a stormwater system. But here in Portugal that is not so common at all. The fact that we put all the pipes in the ground is quite unique. And that we opted for a modern, well-functioning wastewater system, too.
But I like that, those little differences. If you live somewhere where the earth is largely made of rock, surely you won’t dig in any pipes?! And rainwater runs off the mountain by itself… And if you live somewhere where it’s so flat that you can see everything, surely you’re not going to fix pipes above the ground?! And you just pump rainwater to the sea… For both, there is something to be said for or against it. In any case, we’ll be rid of the rainwater indoors.

And speaking of rain, after tomorrow it will finally stop here and the garden will start to recover.
And my back too.
And the world too, hopefully, after this terrible crisis.
#tudovaificarbem, as it says everywhere here: Everything is going to be all right.

About groundwork in Portuguese: