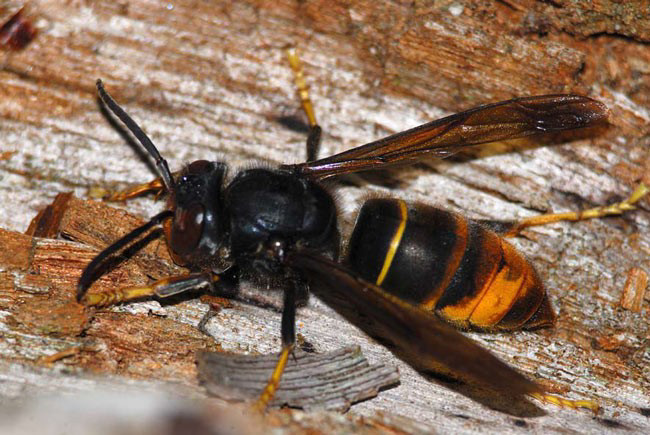 The Asian hornet is only getting hungry for fresh bees and larvae in high-summer. And that is now.

Little groups of hornets hang in front of the hive and attack the honey bees that want to fly in and out. If the bee population has lost a lot of bees, the hornets can enter the hive and eat the larvae as well.

The Asian hornet, Latin name: , is originally from Southeast Asia. In 2004 the first specimens arrived in France with a shipload of bonsai trees. The invasive wasp soon spread across Europe. You recognize her by the black body with a yellow band and the yellow legs. She does not differ much in behavior from the European hornet ( ). It is also a large wasp, of which only the queen hibernates. In the spring she starts a colony. Hornets build large nests, usually in rural areas, and live from (rotten) fruit, nectar, tree juices, larvae insects. Honey bees can handle the European hornets, but they cannot defend themselves against the Asians. Allowing these ladies to really slaughter whole colonies.

How to protect the honey bees against the Asian hornet?

• Immediately report the location if you have seen a hornet nest. In Portugal you can do this on a special portal: www.stopvespa.pt and a pdf with instructions on how to report them.
We had some difficulty reporting observations through this portal; you can also pass it on to the town hall or the local beekeeping association. All member states of the European Union are obliged to combat the Asian hornet. So after reporting, the nest will be destroyed during the night with a telescopic flame thrower.

• Here in Portugal, some beekeepers protect their bee colonies against the hornet with an electric fence, which they call harp. The bees fly through it, but the hornet is wider, touches the wires and is then electrocuted.

• In addition, you can keep the opening of the hives small so the hornet cannot enter. You can also make a wired basket around the opening; honey bees can get to the hive opening, but the hornets cannot.

• Do not paint your hive boxes yellow, yellow attracts hornets. (This doesn’t help 100%, because the mainly orientate on their sense of smell, which is very strong. )

• Start having chickens and let them roam freely around the hives. Chickens are good hornet catchers, especially chickens of the Janzé breed seem to be very good at it.

• Put some hornet traps up. Especially in the early spring, when chances are high for killing the hibernated queens. They will no longer be able to start a nest that will later produce hundreds of hornets. After spring it still worths using traps, to lure the hornets away from the hives and reduce the number of bees they kill.
It will probably help when you paint the traps yellow to attract the hornets more.

As I wrote in a previous post, we received a number of traps from Mónica, the local beekeeper adviser. They are very simple to make. You only need two plastic bottles, a piece of iron wire, a stapler, a pair of scissors, a knife and a drill and 10 time. In this I show how you do it

And this bate goes in the hornet trap:

From February to June you can fill the hornet trap with apple juice or with the following cocktail:
– 1 liter of white wine
– 0.5 liters of beer
– 0.2 grenadine syrup
– a shot of spirits

Update Sept 2020: Quite frankly, we are not impressed by the number of hornets we catch with the summer cocktail. It seems to take a few days before the hornets are drawn to it. But in the meantime, you have already caught a lot of moths and flies with it.
One of our readers said he had more success with meat. We hardly eat that. I tried it with some minced beef, but it didn’t work well either.
Yesterday I saw an alternative on youtube; mix a little water with 3 tablespoons of honey. The trap was completely full in 1 day. I will try that now. In the meantime, we are also beating the hornets to death with our homemade hornet-smacker: