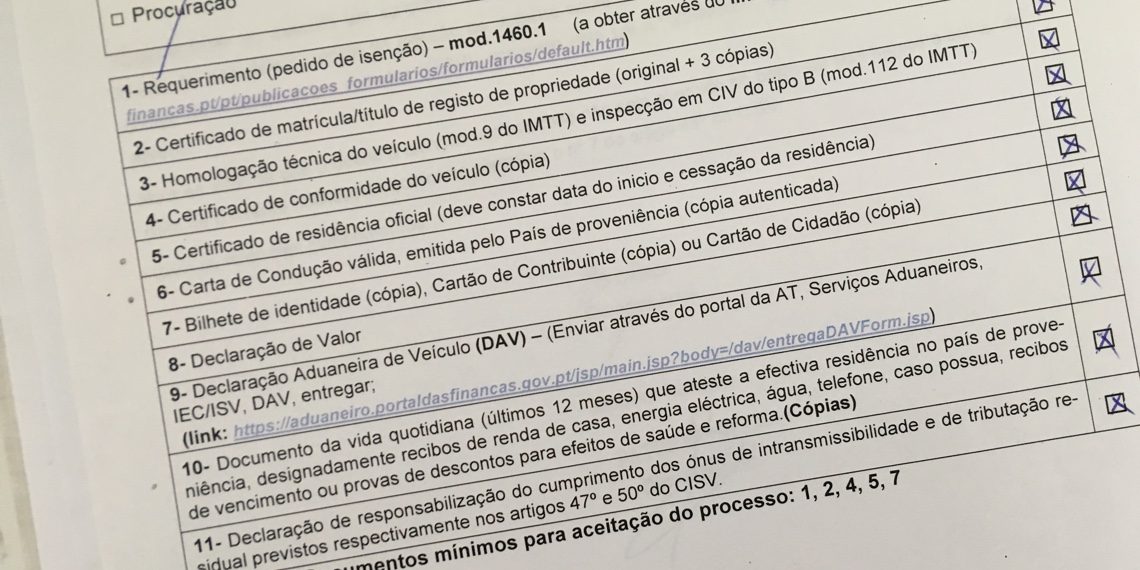 Almost 3 years ago, we wrote the blog post below. It is our most consulted article. And to this day, the article that has received the most reactions.
We are thankful for all those reactions, and the questions we receive by email. And we especially hope that other land movers will be able to import their car in Portugal with less effort than we did.

We are (still) no professional advisers and only describe our personal experiences. Thanks to the reactions of our readers, I do want to give some current additions on ‘importing a vehicle when emigrating to Portugal’.

If you emigrate to Portugal, you’re allowed to import 1 car per person tax-free as part of your household. The procedure can be outsourced to specialized companies and then it probably is a piece of cake.
If you, like us, are members of the do-it-all-yourself club, you can expect a real authentic Portuguese experience. Which you can see as an enrichment of your integration process. It requires patience, perseverance and proper understanding of the Portuguese language. And I’m happy to say that Nuno put our new Portuguese license plates on the Disco today!

In the Netherlands we had two cars: a Citroen C4 on LPG and a Land Rover Discovery. After we were officially registered in Portugal we started with the import procedure for the cars. For this you need a CoC, Certificate of Conformity, which confirms that the car complies with local regulations.
You can request this from a dealer in the country you’re coming from. For the Land Rover we got it very quickly and free of charge. For the C4 it was difficult to get it in the holiday month of August: one dealer was willing to help us for €125, -. So we put the C4 on hold and decided to start with the Land Rover.

The procedure should start off at the district office of IMT
(Instituto da Mobilidade e dos Transportes) of your residency, in our case in Viseu. We took with us: passport, certificate of registration, CoC, original lisence certificate and filled in form ‘modelo 9’ (you can download it here)

Our first aim is to get the car allowed in Portugal and then to arrange at customs that no import tax has to be paid. It is all very disputable because we have free movement of goods in Europe, but anyway…

At the IMT in Viseu we received a print with the procedure explained. (the same info can be found here on the IMTwebsite)
They checked our paperwork and sent us directly to the nearest inspection station.

The Discovery is not an unknown car in Portugal and the inspection seemed to be straight-forward. Until the men of the station saw that the CoC said that the car has 5 seats, while our model only has 2 and is registered in the Netherlands as a company car.
Fortunately, someone from Land Rover and someone from the DVLA in the Netherlands had already warned me about this on the phone. In 2002 both types received the same CoC. The Dutch DVLA man had pointed out to me that on the license card it says with a code that it is registrated as a company car with 2 seats (N1) and hopefully that could convince them in Portugal.

That Friday afternoon, it didn’t. We had to go back to the district office, after the weekend.
At that point we didn’t know yet these things are part of the authentic procedure: You think you are going one step forward, but at the same time something is added or you have to take one step back. An exercise in Portuguese patience …

Anyway, back to the district office: to give an explanation to the head of the department with a few rehearsed sentences. We got a new form for the inspection station again. Unfortunately, this meant that the car is labeled as ‘não está homologado’ and we have to go through a more expensive procedure. The director of the station himself deals with our case. And yes, he starts the technical inspection to allow the car on Portuguese territory! The only restriction is that we have to place a separation fence between the seats and the booth, because that is mandatory. The director trusts our blue eyes that we will do so and gives us the ‘approved’ papers. After we’ve made a fence we can go back to the IMT to collect the new license certificate.

A few weeks later on a Thursday morning we drive back to Viseu with a seperation fence in the car. It is nice and quiet on the road. On arrival we understand why: it is São Mateus. The city saint is honored today and the district office is therefore closed. Another step back and the day after I try again. Then it is quiet because the city is recovering from the hang-over.
When I leave the office, I realize that I have actually been a postman. I have personally delivered the inspection report from the station to them and I had to pay €165. Now we can go to customs to be exempted of import tax.

I try to find out which customs office we need to go and what we need to bring with us. Via the site of the Alfândega (customs) I choose the nearest office and I try to call them for some extra information.
There is some doubt, because they do not know either which office we have to go to due to a reorganization a few years ago.
But in the end it is the office in Braga and I call them to know what to bring with us (in Portuguese!). Fortunately, the employee is patient and can also speak slowly and in simple words and says: ‘Take everything from the list’.
“The list?” I ask.
“Yes, the list.”
Me: ‘And where can I find the list?’
She: ‘You don’t have it? Do you have email? “
Just a few minutes after our conversation I have the list in my mailbox!

Just to be sure, I brought my laptop and our hotspot when we went to Braga.
That wasn’t unnecessarily. Of course there was a error in one of the forms. But I could change it on the spot and sent it in once more. Pfffffff, step by step every box on the list got checked. We succeeded!

A few days later the new Portuguese license certificate arrives by mail. Now we may go to the tax office to pay road tax. Our old Disco from 2002 is charged at the same rate as a car from 2018. A painful observation: instead of €50,- per year we need to pay 10 times more.

In the meantime, we’ve had already realized that we don’t need a second car. So we drove the C4 back to the netherlands and sold it there. Piece of cake.

We’re sorry to say, but after writing this post a reader suggested that the unexpected amount of tax, might be caused by a misstake in the process. Read about it in our follow-up. (sept 2019)