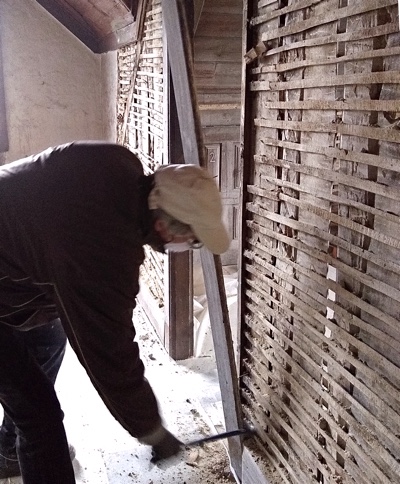 Marselha ceramic roof tiles, breathable membranes, gutters, flashing, battens, just to name a few things on top of our minds at the moment. We are preparing for this year’s big job: re-roofing the ruin. It is quite a challenge because it is a very difficult roof.

You can see this best on a satellite pic from google. I highlighted all the different roof parts. 7 pitched sides, 3 dormers, a tower with 4 sides and also 3 dormers in it.
We start on the north side, with the largest dormer.
That part is in the worst condition. Two years ago, a part of the dormer rake fell down during a storm. And we are very relieved that nothing more from the roof was ‘gone with the wind’ when it stormed.

The irony of the re-roofing is that, at the moment, the attic is the most attractive part of the ruin.
When we saw the real estate pictures of it in 2014, it made us almost immediately fall in love with the place.

Yes, I know we were mad. And we still are…
But not only us; many of our guests felt the same when they entered our magical attic. And most of them urge us to keep it like it is.
For a long time, we thought it all had to go to re-roof the house. But it made us feel bad, because we know if you rip it out, it will never be the same. It is impossible to rebuild that old character.
Nevertheless, the house needs to be re-roofed. We need six 20L buckets to collect the rainwater that seeps in during heavy showers. Not to mention how the moisture attracts bugs, worms and fungi.

Through the years, our perspective on the whole renovation of the ruin changed. We embraced the ‘simply’ rebuild approach: Only replacing the bad parts, like for like. When that’s done, we will still have just a shell, without water, electricity, heating and other utilities… So ‘keep it simple’ in this phase is best. It saves us money and time, we can do those things ourselves and it preserves the original character of the house.

Great starting-point, besides the backtracks we already had in mind!
Our magical attic has a few really small rooms. The partition walls prevent natural light from flowing through the space. That’s why we decided to remove two partition walls.

The walls are built in a traditional way. And although the common word for ‘partition wall’ in Portuguese is ‘tabique’, it actually refers to this specific building technique. I think in English it’s called ‘plaster and lath’. In Holland, it is not that common, because most old houses are built of clay bricks. Sometimes you can find some reed and plaster, under a staircase or in a ceiling.

Anyway, it is a mess to tear it out. The dust is awful. And even with protective gear on, you feel the scratchy dust in your throat when you lie in bed at night. I started with hammer and chisel, but when my arms got tired I took the electric chisel. That went a lot faster, and a lot of dustier!

Then we could remove the laths and the large heavy structural planks in the center of the walls. They are almost 90 years old and completely unaffected. No worms, no bugs, no fungus. Just as we hoped, because we want to reuse this wood to restore the tabique walls of the dormer.

And while I was taking off the plaster, I wondered if we could recycle the plaster too. That would save us a lot of climbing stairs; first to throw out of the old plaster and later to bring in sand for the new plaster. Besides, did you hear about the world-wide impending shortage of construction sand?

Anyway, I did some research and found out that it might be possible to use the old plaster as a base to make new plaster again. You can also restore cracks or parts of the plaster. We decided to do an experiment ourselves.

And it works! So, for renovating the structural part of the dormer, we don’t have to think about and look for new building materials. It is already in the attic, except for new laths.