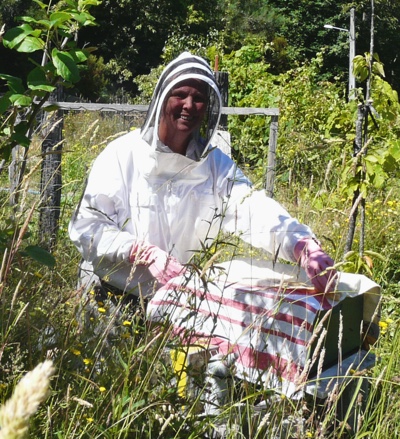 Time for an update on our bees!
Last year by chance we got a swarm of bees and since then we are beekeepers again. But to be honest, the swarm was really small and we were full of doubt if it would survive winter.
But it did, and because of the fine weather in February and March, the colony grew. Starting from May I could give them more space and they were building new combs in the new frames. And at the end of the month, almost all 10 frames were filled with eggs and larvae; the colony was fully grown. I enjoyed the sound of buzzing bees and we could see them on so many flowers in the garden: even in the big flowers of the pumpkin.

When I saw a barrier of honey in the frames in June, I placed a new honey box on the colony. It was already a bit late in the year, and I didn’t expect to be harvesting honey this year. But at least they had space to store their winter food.

The bees really worked hard in the honey box. Within a few weeks, they built new honeycombs and filled it all with fresh honey. But they didn’t seal the honey yet.
Since then, the weather is dry, which means less nectar in the flowers, and fewer flowers in general. The bees know this and react by reducing the number of mouths to feed. The colony contains male bees only during the mating season. And if this season is almost finished and the nectar flow is slowing down, the colony starts to get rid of the drones!

The killing of the innocents.

Around 17 o’clock in the afternoon when the drones are returning home, the workers don’t allow them to come in anymore. Or they simply throw them out, or even pick them up and fly them away! In Holland, we were never able to see this, like here. The drones even ‘screamed’!
In Portuguese it is called ‘a matança dos inocentes’ in Portuguese: the killing of the innocents. It lasted more or less a week.

Today I had another quick peek in the box. But still no sealed honey. I think we have to wait to harvest honey next year. I will let them keep this.
And if the drought is continuing I might even have to feed them before winter.